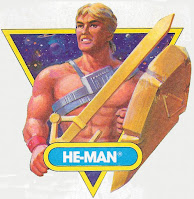 Also, 'The New Adventures of old Christine' is always on late at night. This has nothing to do with that, but I am bewildered how such a long running show could air completely without me knowing.

With He-Man though, his new adventures are really a shot in the arm of rejuvenation as it takes the formula and changes it just enough. It's easy to dismiss as mostly forgotten by history, but it's pretty good. He-Man and Skeletor find themselves in the future on a planet named Primus taking part in their war. I won't go super into details as why, but that's the gist of it. Skeletor finds himself paired with the Evil Mutants while He-Man obviously is with the Galactic Guardians.

The toys are pretty different from the original. It's clear that a complete new direction was the idea. Later some of the molds would be reused for the Demolition Man toyline. The cartoon, while a western production, has a very anime look. It's pretty hard to ignore, so much that if you told me they recycled an anime to use... I'd have a hard time not believing it. It's distinctly in that 80's/early 90's anime style. Some scenes could easily be mistaken for Masterforce. Clearly I like it. While I'm not saying you should, I am saying it's worth checking out.