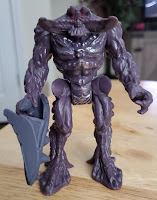 The Kharn Brute Class specializes in power and destruction. They have very low intelligence and are controlled by a commander. Their skin is nearly impenetrable and it’s hard to take them down.

The Brute is a Kharn troop that resembles a demon straight from hell. These are the big bruisers that are usually carrying some heavy firepower into the battle and are twice as hard to kill the regular soldier. You know the type.

The figure comes with a big alien gun that looks like it would be more than enough in a fight. However the Quake Arms and Shock Arms accessory packs provide extra firepower to do some serious damage. It's really surprising to get such a cool figure for just a dollar. Let alone a completely cool line for a dollar each.