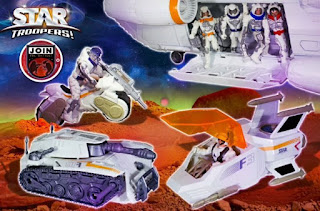 Lanard makes really neat toys that don't cost a whole lot. That's hard not to like. Their current Aliens (now with Predators!), Jumangi, and standard bearer Corps! lines sell steadily with practically no advertising or marketing outside of word of mouth. I remember during their Skull Island line hardly seeing anything about it, but those jumbo Kong figures were a pretty hot commodity.

The newest line to that'll be arriving in stores presumably soon if they haven't at yours already is Star Troopers!. A throwback to their S.T.A.R Force figures Star Troopers! pits way cool astronaut soldiers against space bugs. How is that not awesome? 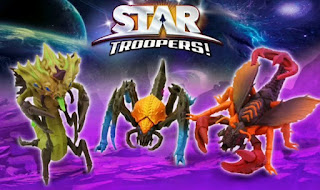 Like normally, there's a bunch of mold reuses, but in space adventure deco that makes them look new. Not to mention the new space alien toys really work well with the old toys to make them fresh. Lanard has a really good way of making toys that seem like they came from an old video game. These guys definitely have that vibe. I feel like there should be a Star Troopers! game by Sunsoft. 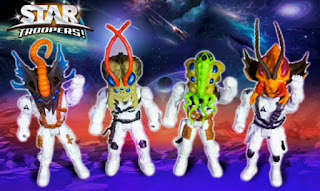 Keeping up with Lanard releases can be hard. News of this line broke last June when my attention was mainly on moving. So the random posts just flew under my radar. It wasn't until this past Sunday that I discovered them. There was a posts in Final Faction and Microman groups I was browsing whilst watching Ultraman. Pretty much everyone in both groups was excited.