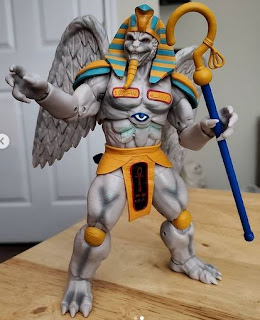 With a little Christmas gift card money, I picked up the MMPR Lightening Collection version of King Sphinx. I had completely forgotten this toy was coming out, but jumped on him immediately. King Sphinx has always been one of my favorite monsters from MMPR. He was heavily featured on merchandising in the series since he was in the unaired pilot. However they called him Fly Guy in that pilot and frankly, I don't 100% hate that.

In Zyuranger he was known as Dora Sphinx. The differences from Super Sentai to Power Rangers is really clear in these episodes. King Sphinx is a big threat for the Rangers, but an even harder obstacle in Zyuranger. I'm not saying one is better than the other, that's up to personal tastes. I find the differences very neat.

Despite being all over the place merchandise wise, he's only in his particular episode and I've always been a little let down by that. King Sphinx is just so cool looking, I've always wanted him to be a regular character. He's paired with Goldar during the big fight of his episode and they make a good team. 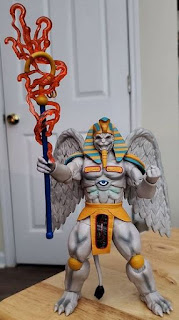 This figure is pretty nice like most Lightening Collection figures are. He has articulation in ways that never would have occurred to me before. The arms just don't rotate or swivel and the shoulder, but they also move outwards. Fancy figures with a billion points of articulation are hardly a new thing, but I'm still a little amazed by them sometimes.

You've probably noticed just how good looking this figure is from the pics. Or you're looking at my living room closet door. We keep our jackets in there. King Sphinx is better sculpted and painted than the actual costume used to portray him in his episode. I said what I said. The paint job is downright immaculate and I'm still blown away by the details. The toy is around $30 at Target, but looks like it should have cost way more.

King Sphinx comes with his scepter and one of those special effect thingies. The special effect represents his magic spell and fits over the scepter nicely. It has question marks which work well to represent his riddles. I literally have nothing bad to say about this figure. It's freaking awesome.