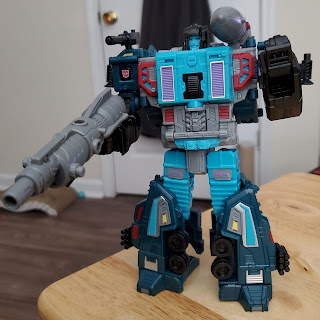 Earthrise Doubledealer here was a Chriatmas gift from my wife. I super like him. I've always liked Doubledealer, but I really like this one. Like most War For Cybertron figures, they nailed it. I've got an odd relationship with Doubledealer. He's one of those characters that's been a constant in my Transformers fandom.

When I was a kid, the double Powermaster gimmick blew my mind. If you weren't aware, Doubledealer isn't your average Transformer. He's a double agent! Either posing as the Decepticon Dealer or the Autobot Double depending on the situation. Whichever side he's on at the moment dictates his Powermaster partner and alt mode. With Skar, a Decepticon. However bonding with Knok makes him an Autobot. What dictates who he is? Money. Doubledealer is a Mercenary.

He's that guy who works at McDonald's and Burger King at the same time without one knowing about he other. 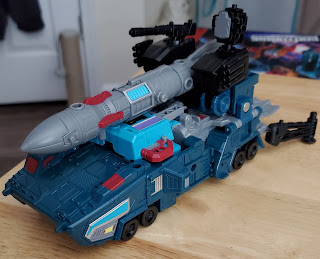 I didn't get a Doubledealer in G1. It wasn't until I was an adult that I finally did. Though, it can be hard to get a complete Powermaster. After a lot of searching I ended up with an amazingly good Chinese knock off that was a perfect copy. All features, Powermaster partners, stickers... literally an identical copy. So that's my G1 Doubledealer. He's a little weird, but so am I.

There was another Doubledealer finally released in the Generations Thrilling 30 series. Unfortunately it was just a repaint of Blitzwing. At least the toy looked really good in those colors. Luckily Doubledealer was made in toy form again for Earthrise.

It's great. His chest works like Soundwave's cassette compartment which allows his Powermaster buddies to return. They were released in a Selects gift set much earlier in 2020. I've got them... but not sure what box they're in. I'm still a little unorganized from the move. Dude, this is a really good toy. A really good toy of a guy I've always really liked. Life is rad. 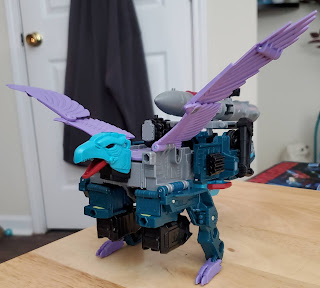