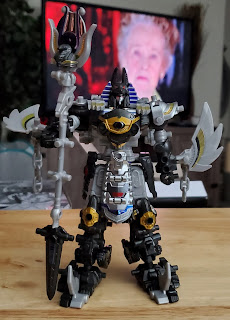 I don't know if it's been noticeable, but I've got a really big toy back log. This isn't a problem, and if it is, it's a good problem to have. Because it gives me plenty of material to work with here. Speaking of here, today we're talking Machine Robo. You know, Gobots.

I have two boxes of Mugenbine I bought in 2019, Mugen Saga to be exact. Machine Robo Mugen Saga is a series of Mugenbine candy toys Bandai has been putting out the past few years. Dark Pharaoh here is the 'evil' version of Mugen Pharaoh and released with a new Arthur Paladin (I'll get to him later) in the same series. Mugenbine's gimmick is that every robot can combine with each other. The possible combinations are only limited to how many you have. It's pretty neat.

The specific team that makes up Dark Pharaoh is the Dark Five God Beasts. Individually: Dark Anubis, Dark Sphinx, Dark Ra, Dark Scorpion, and Dark Sobek. I'm pretty sure you've picked up on the that it's an Egyptian themed set. You may have also noticed it's dark. Dark Sphinx comes with a tiny pilot figure. The human pilot is a designation of a good guy as the robots without pilots were turned evil.

There's not much of a story to Mugenbine outside of a few blurbs of text and commercials (maybe a pack in manga). Mugen Pharaoh has a Buildroid so presumably he's a good guy... but this is Dark Pharaoh and dark versions are traditionally evil. Because of that and based on the teams individual forms, I've mentally classified the them as newer Devil Invader members. Because I like Monster GoBots and they pretty much fit the bill. Just look at how disapproving Lorraine Warren is towards Dark Pharaoh in the top picture. That's not just because I was watching spooky shit on Discovery+ either.

The set is pretty great and no matter how slick the combiner looks, the individual members still feel like old school GoBots. It's a nice balance between new and old. The combination isn't a simple affair, you literally have to completely dismantle the team and assemble it from all the parts. Not to mention, these are candy toys. Which are basically model kits that need to be individually assembled themselves. Opening up each members box, assembling, and then assembling Dark Pharaoh was almost an all night affair. It was a lot of fun and I've got three more teams waiting in their boxes. Good thing I've got Discovery+ and Doordash.