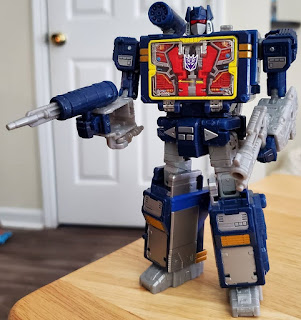 Another of my Christmas gifts from the Mrs. was the new Netflix War for Cybertron Soundwave. Like all other Netflix Transformers toys, he's exclusive to Walmart and quite the hot commodity right now. While most of the Netflix lines is repaints of prior Siege and Earthrise toys, Soundwave is a remold of his Siege toy. In Siege he had a pretty G1 faithful robot mode and turned into some kind of space ship. Now with a few remolded parts, he can turn into a very faithful version of his G1 tape player mode.

This gives fans the best homage of the original Soundwave as a Generations toy. Prior to that was the Masterpiece toy which can command a pretty high price these days and may not be as easy to find. Now you can easily go to your local Walmart and pick one up for $40. Not a bad deal at all. Now the only issue is if he's in stock, which results may vary. 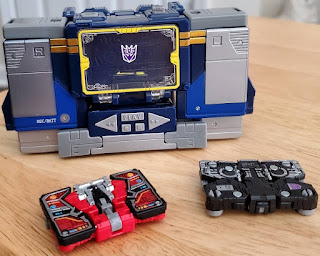 Like I said, he's a very faithful recreation of the Soundwave from G1 and looks very much like his cartoon appearance. He even comes with a Laserbeak and Ravage. Those are direct reissues of the Siege versions as far as I can tell. I'm a big fan of the Laserbeak, though Ravage is a much blockier cat than you expect going in. I don't mind it, but there's no ignoring it either.

Soundwave can store a single cassette in his tape door and the eject button opens the door as you'd expect going in. The transformation from robot to tape deck is pretty simple and not very much different from the original G1/Microman toy. You do have to get a few things exactly right or he won't tab together correctly. It's not too hard thankfully. 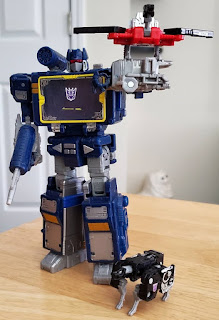 Soundwave overall is pretty great. I already really liked the Siege version. I can't really complain about an improved version of it. He's classic G1 Soundwave with modern toy upgrades such as plentiful articulation. When you buy this, you know 100% what you're buying it for and you're getting exactly that.

I'm not sure if he can still change into the spaceship mode the original Siege toy has. I didn't even bother trying, I already have that toy (and Soundblaster) and wanted this for the obvious reasons. I don't really have anything to complain about either. Though have seen some complaints about some of the random gaps in robot mode from part storage in alt mode.

For me, Soundwave is another one of those classic characters I just can't get enough of. I don't mind when they get experimental with him or when they do something like this. He's one of the more iconic parts of Transformers and as the line approaches 40 years it's legacy is going to be more and more important. They'll make a brand new looking Batman and release a traditional one right after. They'll be a new bad guy in Star Wars and a updated Darth Vader figure on the hooks as well. That's just how legacy brands work and I don't have a problem with that. I'm happy to have another updated classic Soundwave.