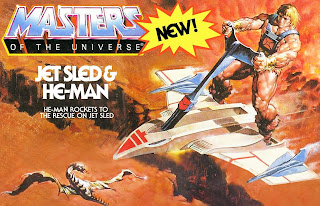 When it comes to Masters of the Universe, the Sky Sled is all anyone can seem to talk about. Sky Sled this, Sky Sled that. Never mind the Battle Ram is the rest of the vehicular package. It's not that I dislike the Sky Sled, I like it a lot. Just got the new Origins version and am waiting to get my Mega Construx Battle Ram set. I do have a more favored sled in the MOTU world, and that's the Jet Sled.

The Jet Sled is one of the various accessory packs Mattel released in 1986. These packs were sold at a much lower price than a vehicle and offered extra play value to go along with your MOTU figures. The Jet Sled for example was a basic sled that a figure could fly around on or wear as a jet pack with the included armor. 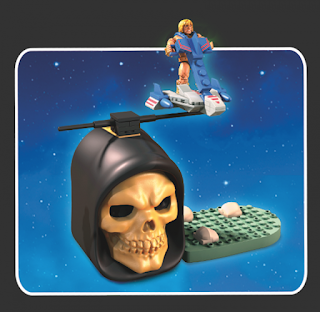 It's a pretty simple idea and the sled paired pretty well with the standard He-Man figure, so much that a two pack with classic He-Man and the Jet Sled was also released. The accessory sets were pretty cool in all for not a lot of money.

The Jet Sled itself hasn't seen much love since. Aside from a Sky Sled released as the Jet Sled in the classics line, the toy hasn't had any new versions until now. The Mega Construx MOTU line has these awesome Skeletor heads showing up at stores any time.

These heads have a small set inside with a figure. The Jet Sled and Cliff Climber are updates of classic MOTU toys while the Laser Cannon is apparently the Castle Grayskull cannon. Weirdly enough, these accessory sets make me think of Micronauts a little. While the prototype of Castle Grayskull used Micronauts parts for the laser cannon.