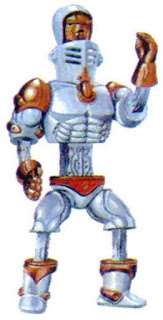 There was a lot of members of the Heroic Warriors, each pretty unique in their own right. You had flying dudes, dudes with big fists, dudes with guns, and then you had Extendar. Extendar was a cyborg knight who had the ability to extend himself (get it) into a giant when things got tough.

Fictionally he was a friend of Prince Adam's who was just a regular knight. Wishing he had special powers (I mean, apparently EVERYONE else has them), Hordak promises him them and does follow through. Giving him the power to transform into his new Tower of Power mode.

Also Hordak turns him into his mindless slave because bad guys generally do that sort of thing. He-Man helps him break free of Hordak's spell and Extendar now has the super powers he craved. Also now his name made sense after all this time. Before that was just his name. Because Eternia.

There was also another origin story featured in UK comics in which Extendar and Dragstor of The Evil Horde were originally friends. A kidnapping by Hordak turned them into their super powered cyborg selves. Extendar was able to break free of Hordak's mind control, but Dragstor wasn't. Extendar went on trying to free his friend of Hordak's control as an ongoing plot.

As a toy, Extendar is a more complex than the standard MOTU figure. He's thicker knight with basic standard articulation except for his waist and head. A really sharp looking figure too, pearlescent white with copper accents and a big red shield. To transform him, you literally just extend out his parts. It's in his name.

Knees, elbows, waist, and neck extend to form the Tower of Power. The extensions are sculpted with circuitry detail and a peace symbol on his neck. Because Eternia. The shield also unfolds into a larger shield as now he's a much bigger target. There's a MOTU Classics update in which the extensions are snap together parts instead of the extending gimmick. Also included is a lance that really fits in with the whole knight theme and I wish was included with the original toy.

I hope Mattel fits him into the newer toys. He was always this great figure that stood apart from the others. I don't want to say because he was a giant... but that was why. However, he transformed into the giant, making him even more unique. If he was a knight that didn't transform he'd still be pretty great. Wonder what his name would be then? Earl? 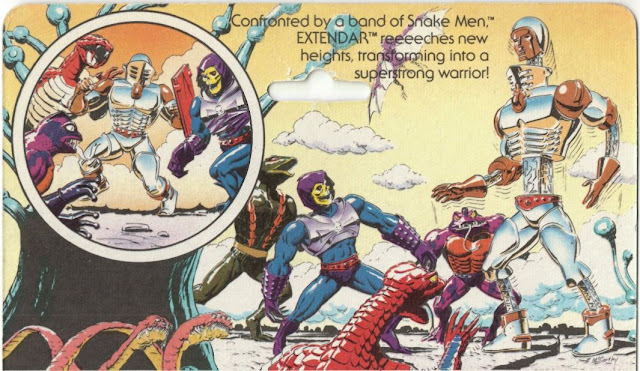