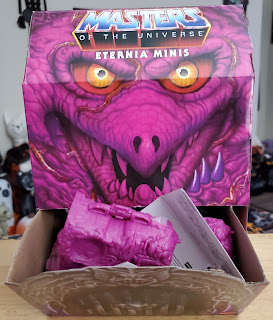 There's a problem with Eternia Minis, and that problem is that you have to strike when the iron is hot. They don't languish on the shelves. When news of series two already hitting Walmart shelves, I mobilized. Thanks to the help of an patient wife, I managed to track down the entire batch last Saturday across two different Walmarts.

Something I wish I had done with the last series, I did this time. I took the display box home. Just look at it. It's majestic. Before any of you get the wrong idea, I just got one of each figure. I left the rest behind on the shelf.

One of the more cool things about this line is the castle themed capsules each figure comes blind in. Series one was Castle Greyskull. Series two, Snake Mountain. These little capsules are perfect little recreations of the original castles. I've been seeing folks get creative and give them paint jobs that look great. They also make a good stand for the figure.

As you could expect with the Snake Mountain theme, this is a villain heavy set of toys. There's two repeats from last time here. Regular He-Man and Skeletor, it's safe to say variations of the main two will appear in each batch. This time it's almost double as you get Faker and Golden Armor Skeletor is the set as well. Faker is a different character, but still basically He-Man and Golden Armor Skeletor is a straight repaint. If repaints bother you, there's only two molds that haven't been released already in this series. You also get First Appearance Trap Jaw and Snake Armor Man At Arms which are straight repaints from the last set. For me funky colored recolors are part of the fun in stuff like this.

Trap Jaw appeared in a slightly different color set in his mini comic debut and that's fully represented here. Snake Armor Man At Arms is a throwback to the snake armor variations of the Heroic Warriors from the 2002 MOTU line. The two new molds are Beastman and Stinkor. Stinkor is one of my favorite classic MOTU characters so having a little one of him here is awesome. No signature stinky smell unfortunately. Can you imagine opening that little capsule and getting a face full of skunk funk? I think about it all the time. You can probably tell by the picture mine got a little over spray on his face. I may take a sharpie and fix that eye later. The original Stinkor was a Merman repaint with Mekanecks armor. These are solid body molds with parts swapped, so I'm guessing both Merman and Mekaneck are on the way.

Beastman looks great. I've always liked his armor and everything just comes together perfectly here. I'm pretty surprised he wasn't in the first series as he's one of those main guys you expect in a first batch. I wonder how many repaints his mold will get as the upper body is pure Beastman. The original mold reused parts to make Stratos and flocked without armor to make Mossman. These solid body parts throw a wrench in that old method, so we'll have to see where the parts end up. I kinda hope they make Grizzlor and later use his head on this mold to make a movie Beastman figure.

As with series one, these are great figures. So far I love collecting them even though it can be a headache. I hope after the Walmart exclusivity ends they'll be easier to get. Something like this has Walgreens or Five Below all over it and I'd be all over that. There's a pretty easy code system of letters printed on the bottom of the capsule. You can either go by the list I've got for you here or just keep count of A-H.