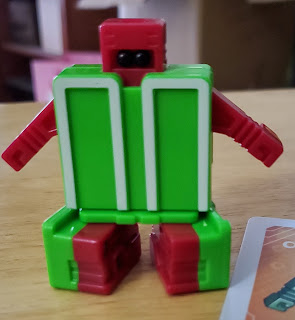 The Letrabots are a blind bag line of transforming robots who as their name would suggest, turn into letters. I've seen other letter based robots come in sets and really have no clue what line those belong to. I was at Target, saw the box, and grabbed a pack. Firebot comes from the series 'COMBO BIG ROBOT ADE' as this team combines into a larger robot named ADE (I know).

This series is specifically a glow in the dark series, I don't know if the other series by Cicaboom feature this, but I'm game to try their other sets if I can find them. They're pretty neat looking in an old school kids meal way. The combination aspect is motivating me into trying to complete the set more so than the toy. The figure is pretty neat, but an end result to completing the series is a plus. 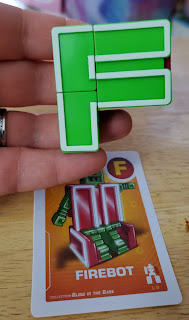 Firebot is a little bot who turns into a capital F. His included card has reversed colors than the actual toy and I'm not sure of that's a case variation (one proper colored, one reversed per case) or just a production change. Despite being a simple little toy, his transformation is a little more involved that I expected going in. There's actually a swiveling part in between his torso and legs which has you doing an additional twist to put everything into place. It's not super complicated, but I didn't see it coming.

I didn't take a picture of the extra bits in the bag. One is a hand and the other is part of a gun for ADE. Firebot is ADE's left arm and I swear the combiners name is going to give me a coronary. For a basic little toy, it's pretty neat. I can't tell if there's a code system or not for the baggies, but there is little peep holes which may or may not be any help. I guess I could feel what letter is in each one, I just grabbed one blindly and got Firebot here.