I have the Championship!! 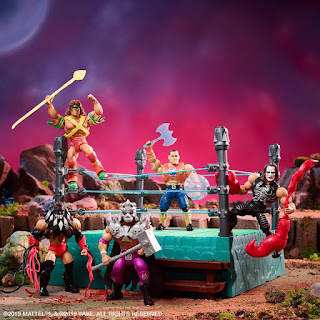 One of the toy lines for 2020 that I'm super excited for is Masters of the WWE Universe. Mattel is doing a lot with He-Man in 2020 with the Origins toy line due in fall as well as other fun stuff like more Mega Construx toys (love) and the upcoming Netflix series. Mattel also makes the WWE action figures that are pretty popular among wrestling figure collectors.

Somebody had the idea to mash He-Man and WWE together in a fun toy line exclusive to Walmart. That somebody is a genius. I hardly watch WWE anymore, they lost me somewhere awhile back. I keep casually informed as to whats going on, but I'm more into other wrestling companies. That however doesn't keep me from loving this. Fortunately a good deal of the figures are older wrestling stars that I'd be more likely to buy like Sting or The Ultimate Warrior.

The toys seem to be using Origins bodies and weapons, so they'll match right along with those figures. It's kind of funny. Back in the day, companies like Remco would use their MOTU 'inspired' toy molds to make wrestling figures. Battle Tribes homages this with their figures. Now Mattel is even in on the act.

It's silly, but it's fun. The Grayskull Mania set is proof of that. Five point five customizers have been using wrestling figures for year, because duh. I'm really looking forward to where they go with these. Specially after some of the Savage World/Primal Age customs I've seen. It's just neat, you know? 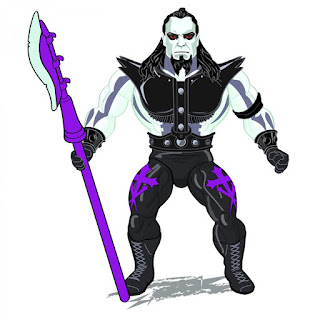