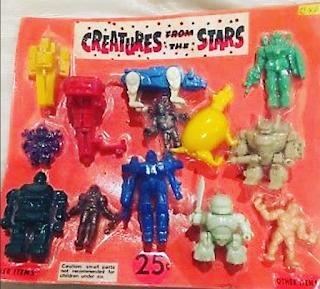 I've mentioned before my love for capsule toy machines. Probably one of the reasons I love blind bag toys so much and wish I had access to the gashapon haven that exists in Asian countries. As a kid and even now I can't pass one by without checking out what they have inside. Sometimes it's just those crappy rings (pass) and sometimes it's gold (dammit, I need quarters!). Before I go any further, this is one of those posts where all the images came from screen shooting Google image search results from shady auction sites. Bootleg Voltron figures sold in gumball machines don't exactly always pop up on Amazon, gnaw meen brah? 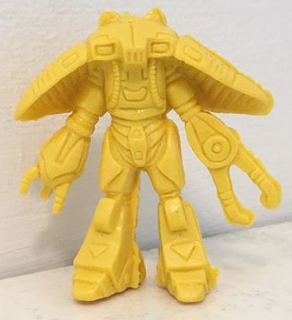 I didn't know what a keshi or a bootleg was when I was 8. But I did know these neat little rubber monsters and super heroes I'd get from the machines at the grocery store looked like Godzilla and guys from video games. Later in life when learning more about such things... turns out they were from Godzilla type productions and video games originally. Or hey, when my childhood arcade got prize redemption counters. That little bucket of colorful dudes have tiny Masters of the Universe mixed in with the dinosaurs. Luckily those always were the cheapest options, so a few dollars worth of skeeball really paid off. Or man, these little robot model kits in the Kroger machines look like the guys from Robotech. Some reason that one Kroger had those model kits on lock down. 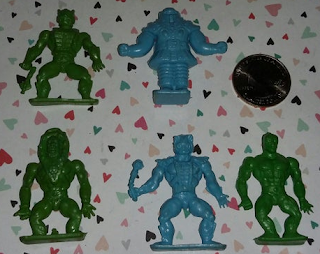 One of the more odd outlets for these toys was party supplies. Thanks to curiosity getting the best of me on a faithful trip to the store, I noticed the party supply section had more than just balloons and birthday candles. Baggies of cheap toys intended for goodie bags usually contain those crappy race cars and planes with the wheels that fall off. Or those stupid little games where you have to make the ball bearings fit into the clowns eyes by rolling them around. But sometimes... dude are those Madballs? 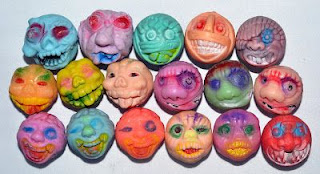 Next thing I knew I had a bag full of tiny rubber Madball rip offs for a dollar. This is still a common occurrence. Next time your around a party supply section or store (the more ratchet the store, the better) check those out. Usually it's just crappy kazoos, but on occasion you'll find M.U.S.C.L.E rip offs or whatever. One time I saw some Street Fighter figures. They were from a gashapon series originally, bootlegged in weird plastic that kinda smelled like fish. That's the gambit you run with el cheapo bootleg toys. They're usually pretty sketchy and might be made in a facility next to bathtub meth. So uh... be careful mang.
blind bags bootlegs capsule toys discount store robots gashapon gatchapon kaiju keshi madballs Master of the Universe mini figures models monsters robotech Super Sentai Zone Base