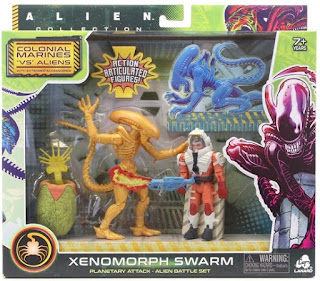 Great news, everyone. Earlier today news broke of upcoming Alien toys by Lanard! Lanard, best known as the makers of the Corps! line of action figures has been making some really great licensed toy lines. From Kong to Rampage, and now with Jumanji, Lanard has been really knocking it out of the park with their great toys at really low prices. This year I've been a big fan of their Primal Clash line of figures myself. They're just good toys at a great price despite the snorts of toy snobs online (how does that even happen?). 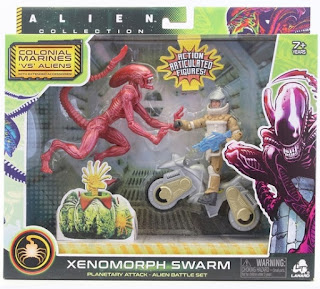 With this new Alien line, Lanard is following their formula of new sculpt monster packaged with reused Corps! figure molds. These toys are bright colored and neat looking. The sculpting of the Corps! figures with the colorful Aliens make me mentally think of various video games like Alien Syndrome by Sega or the Konami arcade game (among others). Not to mention by making the Xenomorphs colorful, they make me draw mental comparisons to recent Reaction figures and the classic Kenner line. I also like bright colors on toys and man just LOOK at that neon nightmare packaging. 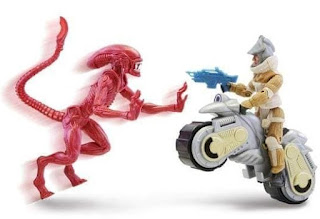 So far details are scarce. They've been spotted on Smyths Toy Stores site and I sent Lanard an email this morning asking for any details they could give me. Usually Lanard action figures are exclusive to Walmart stores here in the US (for the past few years with a few exceptions here and there), so I already know where to look. I'm hoping they'll take the place of Jumanji toys and replace this years selection sometime after Christmas. As much as I loved Primal Clash, this would make one awesome replacement.

*edit* I just got a reply from Lanard,  the Alien toys will be in US Walmart stores shortly after Christmas with even more Alien product due halfway into the year.
at November 21, 2019
Email ThisBlogThis!Share to TwitterShare to FacebookShare to Pinterest
Labels: action figures, alien, aliens, awesome, Lanard, neon, sci fi, The Corps!, toys, Zone Base