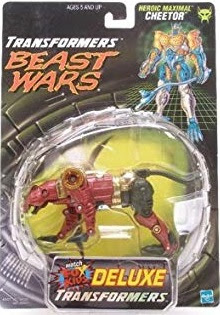 The other day I was playing with my Spark Armor Cheetor. It's a pretty fun little toy and for a Beast Wars fan it's nice to buy a Cheetor at Target again. It's not uncommon for my mind to race through potential repaints for the mold. There's the obvious Ravage (I'd go nuts for a Shadow Panther version) and Tigatron. That's always going to come up. Then my mind went to CatScan and Panther, which is a little more under the radar, but something I'd be all for. Though something I'd love would be a homage to the Fox Kids Transmetal Cheetor.

Beast Wars was a syndicated show here in the US that later aired on Fox Kids. New releases of some of the toys were made available to go along with the show now getting seen by a new audience. These Fox Kids versions had different paint jobs to differentiate them from the prior versions. Some a lot more extreme than other, like Transmetal Cheetor. Now in a darker red and black scheme dominating the toy, Cheetor looked like someone else. 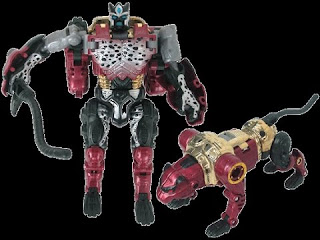 It's a lot different than you'd expect Cheetor to look. Despite the weirdness of it, I've always liked the repaint and just thought it looked great. Spark Armor Cheetor, while looking more like the original Cheetor toy, is pretty angular and I'd like to think could pull these colors off pretty nicely. I'd be pretty happy with a million recolors of the toy in a million different cat bots. It's a great figure and one I'd love to see homage random versions of... Hey, you know what would also look great? The Armada one!
at August 21, 2019
Email ThisBlogThis!Share to TwitterShare to FacebookShare to Pinterest
Labels: beast wars, Cheetor, cyberverse, fandom, Fox Kids, spark armor, toys, transmetal, Transmetals, Zone Base