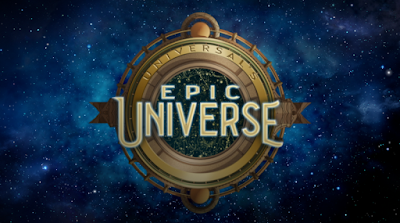 Universal Orlando announced earlier today (yesterday for you) the upcoming new park at their resort called Universal's Epic Universe. This will be the fourth park at the resort and second park since Comcast bought the company. I'm pretty excited even though it's years away from opening. I've been watching the developments of this on theme park blogs as the land was being purchased and various plans were changed and names were thrown around (it was at one point called Fantastic Worlds). While in their press conference, they gave a light description without going into too many details. That's fine, that's to be expected as they're literally still clearing the ground. This is a huge undertaking and in the end will be something amazing. 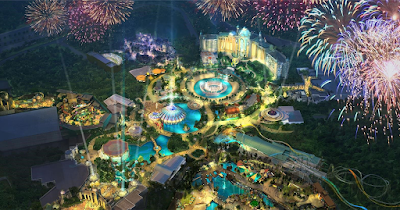 This preliminary picture of the park gives a general idea of what to expect. The new park will have it's own Citywalk and resorts. It's practically a brand new Universal Studios on it's own. While details are scarce, the underground rumblings that have been right all along are saying details that just seem amazing. Nintendo is going to be here. While originally going in the original park, then planned to be spread across all the Orlando resort parks, now the plan is to be here as a basic clone of the Japanese land. The same scuttlebutt claims there will be also a Fantastic Beast's land (more Harry Potter), a How to Train your Dragon land (probably will be a DreamWorks area in general), and a Universal Monster's land (you know I'm practically pee'ing myself over that). What makes this so great is, if you'll notice how Diagon Alley is and look at the plans for Super Nintendo Land in Japan (coming here), you'll have a good idea how this park is going to work by the above picture. Basically self contained themed lands that are accessible by a central hub that will be full of Universal Studios style total immersion. Universal Studios original slogan was 'ride the movies', and as they've been doing in the recent years with additions, they mean it. You're literally going to walk into the movies world and that is AWESOME.
dreamworks epic universe fandom Harry Potter Islands Of Adventure nintendo Orlando super nintendo land theme parks Universal Universal Monsters Universal Studios universal's volcano bay Zone Base