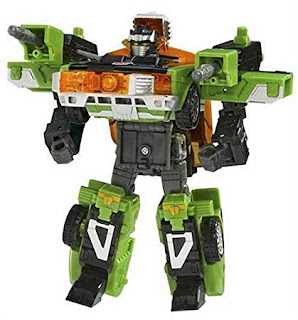 Sometimes weird things happen. In Downshift from Cybertron's case, he was very obviously somebody else. Though depending on what story whatever Hasbro rep gave you, he was Downshift. Despite his naming causing a few headaches, the character got a great toy in Energon which was followed by an even better toy in Cybertron. That's what I'm focusing on here, a really great second toy of a character who isn't who all appearances would lead you to believe, but somebody else. 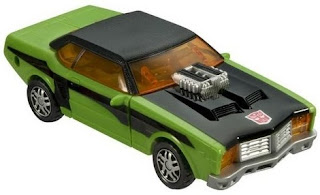 Downshift in his Cybertron incarnation turns into a cool green 70's muscle car. It's a badass car and distinct as not a more modern car. The green and black color scheme looks great and man, there just isn't enough green cars in Transformers. Downshift has two big guns that he can either hold or mount on his shoulders. In car mode, these can attach to his sides. His Cyber Planet Key gimmick activates a grabbing claw that shoots for his chest in robot mode, or grill in alt mode.

Downshift's new toy was pretty much one and done in Cybertron, though by the magic of a hit movie and need of as much products on shelf NOW, the mold was reused as part of Walmart's really cool 2007 movie exclusive set of figures. 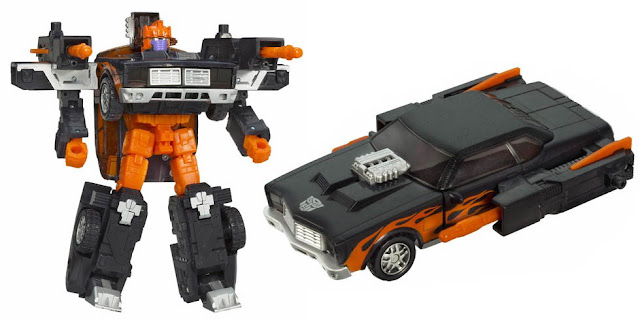 Big Daddy was a new version of the Micromaster character who by that time had obtained a good bit of fandom love. This new figure managed to utilize the wonderful car mode of the mold as a really great homage to the original character. The black and orange really looked sharp and the car looked awesome. Unfortunately this great toy mold saw no other use.
at July 25, 2019
Email ThisBlogThis!Share to TwitterShare to FacebookShare to Pinterest
Labels: 2007, AEC, big daddy, Cybertron, downshift, Energon, Hasbro, Micromasters, toys, Unicron Trilogy, Wheeljack, Zone Base