Earlier when talking about the Shogun Warriors kaiju, I mentioned the smaller die cast figures. Those are the Shogun Warriors toys I had as a kid. Sure the moment for the line had past, but being from those working class roots meant I often got toys from a discount store. These days discount stores usually have a specific version of mainline toys made particularly for that market with a little peppering of off brand goods. Then, however, you had a ton of off brand goods and a smattering of close out buys. So here I was in that preschool (I initially misspelled that and the spelling suggestion was pee school) age at some random shopping trip in between holidays and birthdays either going home with something made by Arco or one fateful day... Shogun Warriors.

I had no clue who Dragun or Poseidon was, but dude they were neat! They soon joined the forces of Darth Vader who now had whoopass robots to fight Luke Skywalker and The Hulk in battle. Super 7 has a cool line of Shogun Warriors in their ReAction series. I should get some of those. 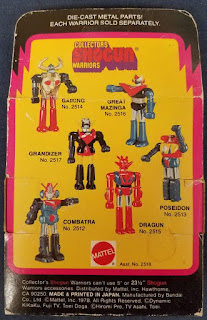