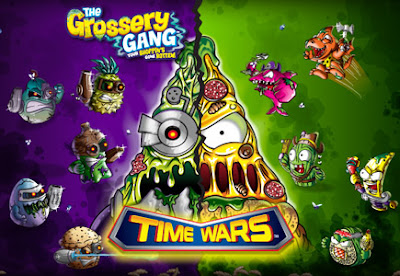 This past Sunday I lucked up on Grossery Gang blind packs on sale at my local Kroger while out with the wife. I've noticed the line for a while now, which is a spinoff of the Trash Pack a parody line of Shopkins. Between being a fan of blind bags, mini figures, and helping my wife buy Shopkins on occasion... there was only so much time before I checked these guys out.

I bought one pack in the 'Flush and Fizz' packaging for my first experience with these little guys. The 'Flush and Fizz' packaging is a fun play on the fizzy based blind packaging. The toys are inside a plastic toilet, with a funnel (part of the packaging) you pour water in the back tank until the fizz bubbles (it looks like pee) away and reveals your toys. There's other types of packaging available for the toys like standard blind bags, multi-packs, and such... buy the toilet was hard not to love. Not to mention, the figures themselves are great little rubber weirdos. 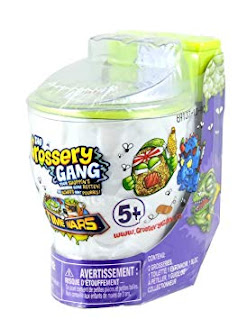 Being a recent purchase, the pack I bought was part of the 'Time Wars' series. Which is the fifth and allegedly final series of the line. I don't know if they plan on a new line in the same vein or what. Either way, Grossery Gang is fairly plentiful so buying a few more shouldn't be any trouble before they disappear. I kind of regret not buying more in the past as I'm pretty happy with the pack I got. With such a popular series of figures, I can only imagine something is slated to follow. Though I've noticed they are made by Moose, the same company that makes Treasure X (I've talked about this neat series on Transform Squadron). Treasure X has been increasing their product range, so maybe between that and the range of more gross blind bag toys on the shelves is the reasoning being Grossery Gang stopping (for now anyway).