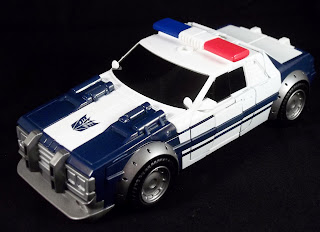 While picking up our grocery order, we went into Walmart to get a few office supplies. Despite the ton of toys I was given for Christmas, I checked out the toy section and was pleased to find the post holiday clearance in effect. Oddly enough the store had the Nitro Series Barricade marked down to $15 while all the other Energon Igniters was at their standard retail price. Not one to argue with a good deal, I snatched him up. 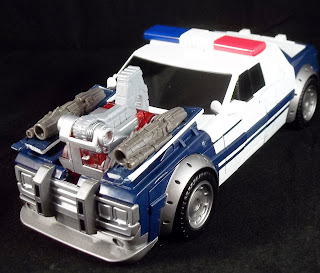 Barricade turns into a heavily armored Police Car who's super cool looking. Inserting the Energon core into the hood deploys some guns and gives him a more badass look with his engine poking through the hood. Barricade seems more out of an old arcade game than the mid-80's setting of the movie, though I'm not complaining. A few simple steps and Barricade is in his robot mode. 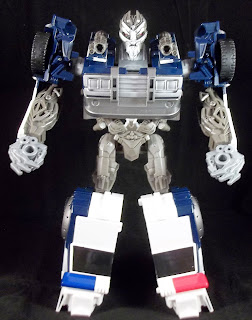 Barricade looks a lot like his 2007 movie appearance here, which looks great even though I'm a bigger fan of his TF5 look. If the toy was smaller they probably could have made it more solid, but it's hard not to like this big robot. He has a decent amount of articulation, though you can't roll him up in a ball like some toys seem to be intended to. I wish he had some guns, I'm sure I could just stick one in his hand. Though the Energon core does make a good circular saw for weekends at home when Barricade is working on his deck. 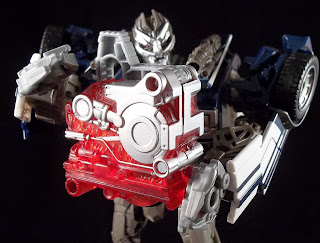