Cobra Commander is a unique character. By all appearances he's a coward who's nothing without his underlings. Though, once he donned his Battle Armor all bets were off and his badassness started showing through. Prior seasons he was evil and ruthless, sure, but once anything got serious he was sniveling. Once Serpentor came around, he was reduced to lackey and kinda in a non-sensible way. The underlings felt like he was no longer worthy to lead Cobra, so they made Serpentor to be the ultimate leader. Ok, I'm down (even though you had Destro right there), but they kept him around and still called him Cobra Commander. Shouldn't his title have changed? Though after the events of the movie and his return to glory, Cobra Commander got hardcore. I'd like to think his new costume at that point was part of his 'New Year, New Me' regime. I know I've always liked it better than his other outfits. Just looks awesome, you know? 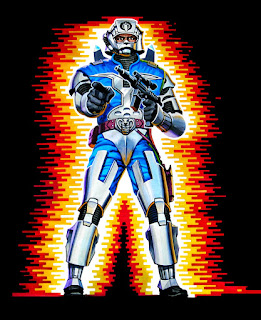