Alice Cooper- Man Behind the Mask


Friday the 13th Part 6- Jason Lives! is one of my favorite of the F13 movies. If I were to call it right now, 1-7 is the series prime time. 1-4 being the best, 5-7 being the back end. The rest are enjoyable, but obviously not up to the prime standard. Still though, 6 is one of my favorites for it's awesome self awareness. They really tried to make it special and they sure did. It was thanks to repeat viewings of this on HBO as well as the constant marathon of prior installments on WGCL 46 (before it was a CBS affiliate and was AWESOME) and WATL 36 (when it was AWESOME) all summer (remember when I said summer was the lead in to Halloween) which inspired me to be Jason for Halloween the following year. 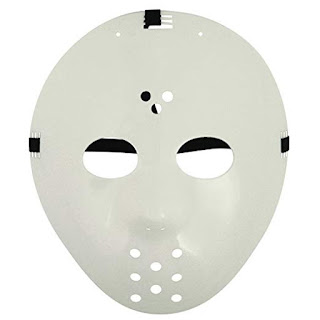 The ever present dollar 'horror' mask that can be found at any store during the season in a variety of colors and sometimes mouth hole opening variations. Before higher end licensed masks of Jason Vorhees was available, THIS was what you had to work with. Honestly, I'd wager this still outsells the official ones. Of course sales data would be impossible to prove since a million of companies make them and you practically trip over them in any store you walk into from September to October. I still occasionally buy one and wear it to a random fall festival or Halloween occasion. That or those rad skull and pumpkin masks that are always hanging next to it.


The 'horror' mask is at this point as much of a staple of Halloween as a pumpkin in my book.
at September 22, 2018
Email ThisBlogThis!Share to TwitterShare to FacebookShare to Pinterest
Labels: alice cooper, Friday the 13th, Halloween, Halloween Horrorcon, Horror, horror mask, Jason Vorhees, man behind the mask, music, Zone Base