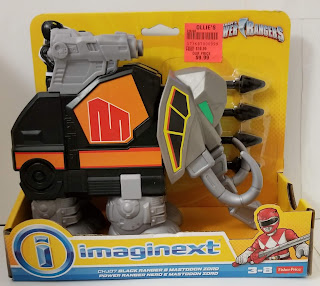 I had the good fortune of picking up the Mighty Morphin Power Rangers Mastodon Zord by Imaginext at my local Ollie's this past Saturday for the low price of $9 (it's normally $15). I had been wanting to grab this guy for a while now, but had been putting it off for one reason or another. Fortunately I stumbled across him while buying household supplies (I tell you that Ollie's is a great place to buy soap). I've been singing praise of Imaginext as well as Imaginext's treatment of Power Rangers for awhile now and this is no different. The Mastodon looks incredible, like other Zords done by Imaginext it makes me think of Starrior animal based companion mounts. That big blockyness just lends itself to the Imaginext toy model. It's a simple toy that works well, it just looks great. 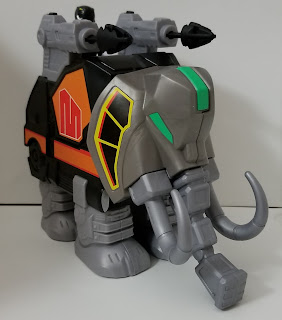 The Zord itself is really simple. Firing missiles (even comes with extras in case you lose some), a play action feature when you turn the figure in the cock pit (he raises his head to gore you with those tusks or let out a bellow), and wheels on his feet to roll the big guy around. No articulation, but none really needed. It's a simple toy intended for young children to push around on the carpet, but in the hands of a 40 year old enthusiast, it's an elegant example in the joys of simplicity.

I don't have any complaints about this charming guy, though I do wish he featured some sort of storage for those extra missile. That though, is a common complaint I have with these Imaginext Zords as I'm often sticking them in the hands of the Ranger driving the thing. I'm sure I could just store them elsewhere, but with that big blocky body, a little compartment isn't too much too expect. Speaking of the Ranger driver:

Included is the standard Black Ranger figure without any of the variations used on other Rangers who have duplicate releases. This is pretty normal for the initial batch of Ranger figures though as the variations came later. It's a good figure, standard Imaginext with those sharp looking Ranger sculpts. He doesn't have his power axe though. I've gotten several instances of this guy already, so that's no big deal. Though I suppose he's wielding those extra missiles in case he needs to hop out of the Zord and lay the smack down.