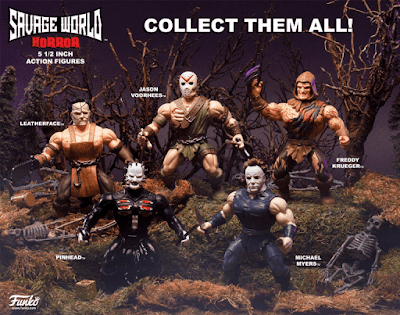 I was just admiring the Mortal Kombat Savage World figures at Target this past weekend and today pics of Funko's newest Savage World series hit the internet! Savage World is Funko's action figure line that pays homage to fantasy figures of the 80's and utilizes that certain beefy barbarian (a He-Man like physique you might say) look in the most amazing way. These classic horror characters really work well in the style and I can't begin to tell you how excited for them I became when I saw them. Let's just say my neighbors were mad. Horror is the perfect base for this type of figure as I've often noted the play sets for those old toys often looked like re-purposed Halloween decorations. Not to mention the art was straight off an 80's heavy metal album cover (which I've already explained my association with Halloween). Just like the horror ReAction figures, I'm finding myself thinking up all sorts of play sets and stuff to add to the fun. I could really see little rubber versions of kids in Silver Shamrock masks, Jason as a child, or other assorted monsters to partner with the characters like Blackstar had.