In the mid 00's, Toy Biz (who were making Marvel toys prior to Hasbro) made a weird, yet fun transforming robot line based on Marvel Superheroes. They had earlier in the 90's made various 'morphing' figures (goodness that Punisher), however these were outright robot toys. The figures were rather large robots based on various Marvel characters with a smaller version of said character serving as the pilot. The pilot figure acted as the toys gimmick key as well. In fiction, the robots were powered by the characters super powers, and via various points on the toy the character would activate from being plugged in. Like others, I found them ridiculous before buying a few and enjoying them quite a bit. In hindsight, I wish I would have bought more as they were really neat.

There was a mini comic included with each toy which fell in order of each toy (so you needed them all for the complete story) as well as a Marvel mini series, which was pretty enjoyable for something so silly. Often times now, you'll see them pop up in various groups and pages with members usually getting them confused for the Hasbro Marvel Transformers Crossovers toys. Which is a shame that they don't have better notoriety. Sure they were weird and were gone almost as soon as they arrived, but they sure were fun in their own way. 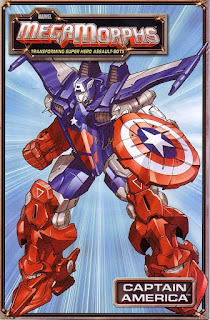