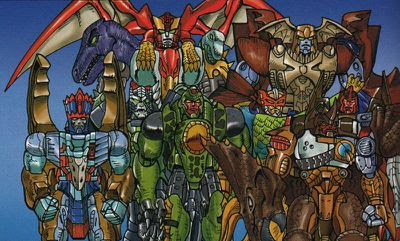 I'm sure I've said it before and most likely will say it again, the Beast Machines Dinobots are my favorite group in Transformers. I don't think I can completely put it into words as to why or what it is that makes them so much more special to me than any other group. Nor do I honestly want to. I feel to many people try to focus on why instead of just doing. I've often hoped for updates to these guys, and had to use my hoping hand to help out with the overpopulation in the other hand (look... it's really starting to pile up). It's not happening. When the Fall of Cybertron Grimlock was shown to have an alternate Megatron head, my mind was taken over with hope for the eventual T-Wrecks version of the toy by way of random exclusive. Same with the movie Dinobots. They're solid candidates as updates in my book. The Walmart Dinobots I hoped were the second coming at the time, but alas, just another (awesome) set of Dinobots that were not the beast era N.W.O.
at January 26, 2018
Email ThisBlogThis!Share to TwitterShare to FacebookShare to Pinterest
Labels: also an analogy, beast era, beast machines, dinobots, fandom, the best, Zone Base