When the Netflix series Voltron Legendary Defender started up, I didn't watch it for like a month. Because I didn't have Netflix at the time. Though, instead of upgrading our cable package, we decided to restart a subscription. So about a month later, I became a fast fan of the new Voltron series. I've always loved Voltron and was hoping the new show would be better than the previous attempts at a new Voltron show were and it was. As soon as it was announced that new toys were coming, I promised myself to get some. 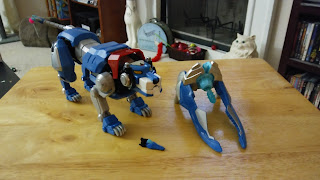 So, right before Christmas, the toys started popping up in stores and with some gift card money, I got them all. Well, all that I really wanted. There are various role play toys. There are action figures (I'm a little tempted to get those), and then there is the Legendary Lions that merge to form Voltron (those are the ones I got). The lions are pretty large. I'd say about 5-6 inches long. They are nice and hefty with a good deal of articulation. The package says 20 points, but I didn't count. I was pleased enough. 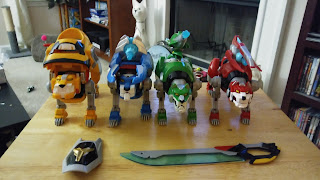 I'm waiting for the black lion to arrive from a pre order (sometime this week), so this post is really about the limb robots. Each one comes with it's Paladin. The Paladin is molded in a tiny cockpit vehicle that stores easily in the lions chest. The cockpit is a tiny hovercraft vehicle and each one is surprisingly different. I expected and wouldn't blame Playmates to just repaint the same mold 5 times. Each also has a firing weapon that can be mounted on the lions back. They're pretty neat and add to each lions appearance individually. Unfortunately, as I don't have the black lion yet, I can't tell if they intergrade with Voltron in any way. The red and green lion each came with parts of Voltron's sword, which I found clever as the blazing sword is formed in the hands formed by red and green. 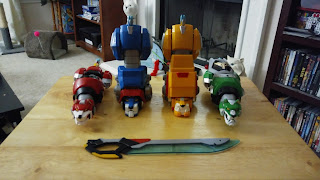 If I have any complaints about the lions, it's that the toes and tails are made from a really soft plastic that mushes easily. Also, the cuff that forms yellow lions ankle in leg mode rubs the paint on the nose of the yellow lion a bit. Outside of that, I don't really have any complaints. The four are really pleasant and hefty toys. Each one is individually different and look like they do on the cartoon. I'm really looking forward to getting the black lion and completing Voltron. Considering how large and chunky these four are, I can't wait to get ahold of the much larger centerpiece.